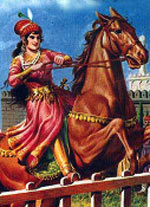 INTRODUCTION:
Razia Sultan, a brave sultan belonged to slave dynasty and was the first mulim women to rule India and only women to occupy the throne of Delhi. She succeeded her father Shams-ud-din Iltutmish to the Sultanate of Delhi in 1236. She was talented, wise, brave, excellent administrator, and a great warrior that attracted her father which resulted that she became the next sultan of Slave dynasty. Though her reign was just for three years, her bravery, her struggle and her undaunted spirit has been preserved in the treasures of history. Razia Sultan’s Tomb in Delhi is one of those places, which relives the unthwarted spirit of the brave woman who ruled Delhi once and for all.

GREAT FATHER OF RAZIA:
Iltutmish (1210-1236) — a doting father, who ordered grand celebrations to welcome the birth of his first daughter after many sons. He took personal interest in her education and training and by the time she turned 13, Razia was acknowledged as an accomplished archer and horse rider who would frequently accompany her father in his military expeditions.
Words of Iltumish:
“This daughter of mine is better than many sons.”
Reason behind being the next sultan of Slave dynasty-
Once when Iltutmish was busy with the siege of the Gwalior fort, he had entrusted the government in Delhi to Razia, and on his return was so impressed with her performance that he decided to appoint her as his successor.

AFTER DEATH OF FATHER:
One of Iltutmish sons, Rukn-ud-din Firuz occupied the throne. He ruled Delhi for about seven months. In 1236, Razia Sultana defeated her brother with the support of the people of Delhi.

WORK OF RAZIA SULTAN:
Being an efficient ruler Razia Sultana set up proper and complete law and order in her in his empire. She tried to improve the infrastructure of the country by encouraging trade, building roads, digging wells. And also she established schools, academies, centers for research, and public libraries that included the works of ancient philosophers along with the Quran and the traditions of Muhammad. Hindu works in the sciences, philosophy, astronomy, and literature were reportedly studied in schools and colleges. She contributed even in the field of art and culture and encouraged poets, painters and musicians.

FALLING IN LOVE:
No other thing can stop Razia except love. The reason behind end of her was her unacceptable love. Jamal-ud-Din Yaqut, an African Siddi slave turned nobleman who was a close confidante to her and was speculated to be her lover. Though it happened behind many veils and doors, their relationship was no secret in the Delhi court.
Malik Ikhtiar-ud-din Altunia, the governor of Bhatinda, was against such relationship of Razia. The story goes that Altunia and Raziya were childhood friends. As they grew up together, he fell in love with Raziya and the rebellion was simply a way of getting back Raziya.
Tragedy followed swiftly. Yaqut was murdered and Altunia imprisoned Raziya.

End of Razia:
When she was trying to curb a rebellion against her by the Turkish Governor of Batinda, the Turkish nobles who were against such female throne, took advantage of her absence at Delhi and dethroned her. Her brother Bahram was crowned.
To save her own head, Raziya sensibly decided to marry Altunia, the governor of Batinda and marched towards Delhi with her husband. On October 13, 1240, she was defeated by Bahram and the unfortunate couple was put to death the very next day.

Posted by The Indian History Blog at 03:00